CANACU (Community of Friends of Nature and Culture), one of the non-governmental organizations working in the areas of human rights, multisectoral assistance, environment and culture in the Democratic Republic of Congo (DRC), continues its activities with Unaccompanied Children (UCA) in different villages in the territory of Grand Bandundu.

It was in the framework of the protection response to the recent crisis in Kwamouth (Mai-Ndombe Province) through the mobile “Child Friendly Spaces” (CFS) and the capacity building of these actors and child protection providers on the prevention of sexual exploitation and abuse”, says Damien Bungu, the Provincial Coordinator of CANACU.

The Child Friendly Spaces are places set up by CANACU where children, regardless of sex or color, enjoy their most basic rights through games and several other activities.

These mobile AECs have concerned three poles, Kwamouth center and surroundings, Kenge Territory, and the city of Bandundu and its surroundings. They reached a large number of children affected in and around the main sites.

This response included of course the IDTR support component to the ENAs, the provision of PEP kits and the strengthening of actors on protection against sexual exploitation and abuse.

Here are the activities developed in each axis:

-The organization of psychosocial and recreational activities in the mobile AEE for children;

-Identification and documentation of unaccompanied children;

-Ensuring family tracing and family reunification of the ENA;

The people involved in this project include community volunteers, members of NGOs, Divas, Gender, Health, Interior, RECOPE members and CSO staff, community leaders and organizations involved in working with IDPs. This has allowed the project’s achievements to be sustained. 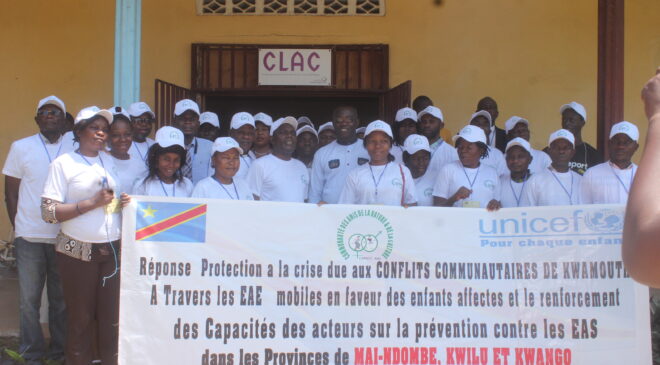 The coordinations of the interveners have been set up in : Bandundu city, Mongata, Kwamouth, Kenge, Fatundu followed by focus groups with the participation of community-based organizations (volunteers) with the objective of listening and documenting the needs and interests of women and girls in humanitarian activities.

The role of these community-based organizations was to support humanitarian actors and Protection in identifying the target group (girls and women) who will participate in the focus groups as well as to facilitate the dialogue with them.

Conferences and debates were organized in Kenge and Bandundu through the use of community radios to present the results of the focus groups on sexual abuse and exploitation.

The project provided emergency psychosocial support to children and communities affected by the crisis.

The psychologists involved in the project had the role of psychosocial accompaniment, referral and de-dramatization including psychosocial care of children.

Damien Bungu notes that this project reached a large number of affected children in and around the main sites.

“This project also included the following components: IDTR (Identification, Treatment, Documentation and Reunification) support to the ANEs; the provision of PEP kits (consisting of rape management drugs to help survivors). This is in addition to the reinforcement of the actors on protection against sexual exploitation and abuse.

It all started with a briefing of the project’s actors on working with children and the briefing on capacity building on PSEA (Prevention of Sexual Exploitation and Abuse) before the deployment on the field”, he added.

CANACU has developed a participatory approach with other state and non-state actors on aspects of psychosocial support for traumatized children and victims of gender-based violence. CANACU also involved another partner in the Kwango province.

Community volunteers, members of NGOs, the Divas, Gender, Health, members of RECOPE (Community Child Protection Networks), staff of civil society organizations, community leaders and other structures involved in working with displaced persons from these conflicts were targeted and involved. This has allowed for some gains to be made to sustain the project.

In Bandundu city, the capital of Kwilu province, 5,118 children attended the mobile EAE, including 2,287 girls and 2,831 boys, as part of psychosocial and recreational activities. At the Kwamouth site, from October to December 5, 2022, the EAE received 3407 children, including 1357 boys and 2050 girls. The site of Kenge, during the same period, we recorded 31406 children that is 20987 boys and 10419 girls. “All this is aimed at de-dramatizing the affected children”, says Bungu.

Clothing and nutritional kits were provided to children in the FAT (Transitional Host Families) before their reunification. FAT support kits were also provided as needed.  At least 90 families have been supported.

Collaboration agreements were signed between CANACU and the General Referral Hospitals of the targeted sites for the care of sick affected children. These are the HGR of Bandundu, HGR of Kwamouth,…

“Beyond the work done by CANACU, there are other needs identified in terms of separated children and other vulnerable children. They have been identified throughout this community.  There are 4,225 children in the various project implementation sites, 2050 boys and 2175 girls. In addition, there are other children associated with the assailants. The attackers used them as scouts before the clashes or attacks on the planned villages. Many of these children are being sacrificed. UNICEF has offered inputs to EPST Kwamouth 1 in terms of tarpaulins for schools burned down in the interior of Kwamouth,” says Damien Bungu.